The Official Journal of the Patent Office publishes applications after 18 months and early publication on request; as required under section 11A of the patent Act, 1970. The journal is being published contains all the activities of The Patent Office such as publication of all the patent applications after 18th months, and early publications with respect to the proceedings as required under the provisions of the Patents (Amendment) Act, 2005 and Rules there under on weekly basis on every Friday.

In the month of June, IPO published around 205 Patent applications under the Early Publication Section.  Among which the majority of the publications represented by Companies were Wipro Limited & HCL Technologies with 9% and 6 % respectively; Along with other Individuals and other Applicants with 36% and 49% publications respectively. 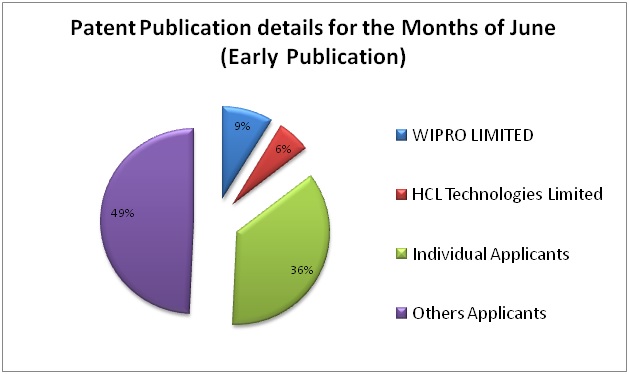 Under the section of Publication after 18 months, IPO published 2524 Applications, including 458 Indian Applications; among those 71% of the applicants were represented by Registered Companies and 29% were individual applicants/inventors.

Companies leading in this section are:

Among individual inventors, these inventors top the list with Majority of applications being published in the month of June.